Changes to Housing Benefit regulations came into effect yesterday with the new 'Bedroom Tax' penalising social housing tenants judged to be living in 'under occupied' accommodation. Essentially those judged to have too many rooms for their needs will have a reduction in their housing benefit (Shelter has a clear guide to the details). Since by definition those receiving housing benefit are either unemployed or working on low income it's hard to see where they are going to find the money to make up the rent... except by going without other essentials. As a banner on Saturday's 'bedroom tax' protest in London put it, more cuts equals less food. 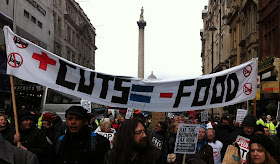 A policy like this is bound to have a big impact in inner South London boroughs where so many people live in social housing. In Lewisham for instance, almost a third (32%) of the housing stock is social housing (14% Council, 18% housing association). In Southwark, a full third of residential properties are Council-rented (33%) and another 12% by Housing Associations (as detailed in this report).
Get a Room?
The Government claims that by reducing housing benefit in 'under occupied' housing, people will be encouraged to move into smaller properties freeing up accommodation for those who need bigger properties. It is true that there is a shortage of properties for larger families, but this is hardly the fault of tenants. Councils have been more or less stopped from building on a large scale for a generation, and private housing building in London is delivering few genuinely affordable family homes.
In any event if everybody living in 'under occupied' housing was willing and able to downsize,  there simply wouldn't be enough smaller properties for them to move into (any more than there are jobs for the unemployed to move into). Last year the Cambridge Centre for Housing and Planning Research looked at Lewisham (and the Lee area in particular)  in its report 'Under-occupation and the Housing Benefit Reforms: Four local case studies'.  They found that in Lewisham 'households currently looking to downsize from a 2 bedroom property to a 1 bedroom flat are waiting an average of 4 years' and are competing with a huge number of people needing one bedroom flats - with more than 6,700 households on the waiting list for a one bedroomed property.
The myth of the 'Spare Room'
Plenty of media reports have talked of the changes as amounting to a tax on 'spare rooms' but few explain how the Government has defined a 'spare room'. Its definition is certainly not one Ministers would tolerate for their own families.
For a start the regulations assume that a couple only ever need one bedroom. There are of course many cases where people are ill or disabled and unable to comfortably share with somebody else. Tough, give up the second room or have your benefit cut.
Or perhaps you're a disabled person who needs a spare room to keep specialist equipment in. Tough, give up that room or have your benefit cut.
The regulations assume that children of the same sex under 16 should always share a room. So a fifteen year old studying for GCSEs must share with a toddler having sleepless nights or their parents will have their benefits cut. Great for their education! Likewise two children under ten of the same sex are not deemed to need their own room though there would be many circumstances when it would be better if they did.
Along with other benefit cuts, such as the benefit cap, this is a policy designed to screw the poorest people in society and will have long reaching and damaging effects in South East London and everywhere else it is implemented. The Government clearly hopes that it can continue to scapegoat the unemployed and low paid and win the support of some of those lucky enough not to be in that position. But many of those whose resentment they are trying to stir up are only the next job cut or pay cut away from themselves joining the ranks of those threatened with losing their homes and just about surviving on reducing benefits. The anger is rising and the tide is beginning to turn.
Transpontine at 6:30 am
Share