'Ian Wright: Nothing to Something' is a great documentary where the former Crystal Palace, Arsenal and England footballer talks about growing up in South East London. It's quite a moving film, with Wright just talking to camera about a rough and abusive childhood, rejection by football clubs as a youth player, before finally being signed by Crystal Palace as a 21 year old. 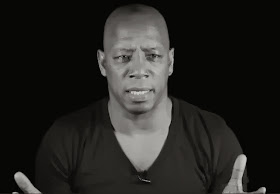 In the programme Wright says he grew up in 'Brockley and Crofton Park', specifically for much of his childhood on Honor Oak Estate. He recalls going on the Honor Oak Estate annual summer trip to the seaside, and going shopping for clothes in Peckham (looking enviously in Grants' shop window at shoes he couldn't afford). On the Estate he used to play football with David Rocastle, later his colleague at Arsenal (Wright gets very emotional over Rocastle's sad early death)

He credits one of his primary school teachers, Mr Pigden, as having a major influence on his life as a positive male figure and a football mentor. In this programme the school isn't named, but Syd Pigden was at Turnham Primary School where Wright moved after starting out at Gordonbrock Primary. Many years later at Arsenal, Mr Pigden and Wright were reunited in another TV programme - with Wright surprized and overwhelmed at finding he was still alive

Later Wright went to Samuel Pepys Secondary School in Sprules/Wallbutton Road SE4 - now Christ the King VI Form. After leaving school, he worked at Tunnel Refineries in Greenwich before being discovered by Palace.

According to 'The Wright Stuff' by Rick Glanvill, (1995) Ian Wright was born in 1963 in the British Hospital, Samuel Street, Woolwich. His cousin Patrick Robinson was born a few days later: 'It probably never crossed the minds of the two proud mothers that the fruits of their wombs would, between them, eventually have Saturday night television stitched up: Ian Wright gracing the pastures of Match of the Day and Patrick Robinson providing the amiable beside manner as Martin 'Ash; Ashford in the popular BBC soap, Casualty'. They lived together for a while in Manor Avenue, Forest Hill

You can watch the programme for another few weeks at ITV. I saw Wright a couple of years ago in Stillness Road, think he still has some family in the area. His sons Shaun and Bradley Wright-Phillips - both also footballers - went to Haberdashers Askes school in New Cross.
Transpontine at 4:30 pm
Share