The funeral of Will Greenwood took place earlier this month in Glastonbury. Born Stephen Worley on 13 June 1959, he died on 10 February this year after being found ill on the canal boat he was living on.


Will moved to Glastonbury in the mid-1980s, and as a guitarist he was very involved in the free festival/psychedelic music scene. He was one of the founders of The Space Pirates who played with bands like Here & Now, Hawkwind and indeed The Ozric Tentacles at the Crypt at St Paul's Church, Deptford at the psychedelic club there. He was part of the Peace Convoy that was infamously attacked by the police in 1985 at the Battle of the Beanfield as part of the operation to prevent the Stonehenge Free Festival taking place (Will wasn't present during the actual attack, but he was involved with the Convoy at that time). 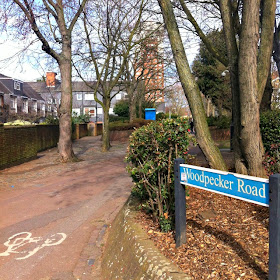 Will's roots were in South East London. His mum (Vera) and dad (Reg) actually met at the Co-op in Deptford. Later Will took some electronic music classes at Goldsmiths, and also recorded music at Music City in New Cross Road. A couple of years ago he recorded a song recalling his 1960s childhood in Woodpecker Road SE14. The road he grew up in has now been demolished, but the name lives on as a pathway through the new low-rise estate to the north of Fordham Park. The late Dewdrop Inn at the end of Woodpecker Road gets a mention (famous pub that closed in late 1990s - must do a post on it at some point). I think the lyrics are as follows:

I'm ambling along almost fifty years ago
Down Woodpecker Road

From the chip shop to the Dewdrop Inn,
misty memories unravelling
Time travelling is great
Allow me to elucidate
It's summer 1966
I'm flying with my building bricks
I'm running back from Newbury's
with my Zoom ice lolly from the freezer
Thunderbirds and Jetson Spacemen
World Cup Willie's won the war again
It was a simpler time, to feel that once again is why
I'm ambling along, oh so many years ago

Down Woodpecker Road
Past the old canals of Clifton Rise
Before the planners waved it all goodbye
Perhaps I must declare that Woodpecker Road's not there...

Ambling along far too many years ago
Down Woodpecker Road
From the front room to the scullery my family returns to me
My atavistic tendency means Woodpecker Road is me...

Read more on Will Greenwood in the Central Somerset Gazette
Transpontine at 6:00 am
Share