Electro/alt pop duo Oh Wonder played a sold out gig at Brixton Academy this month, part of a massive international tour to mark the launch of their second album Ultralife.  Their track Without You has had 44 million views on YouTube. Not bad at all for an outfit who started out putting songs up on soundcloud in 2014 and have recorded both their albums in their flat in Brockley. 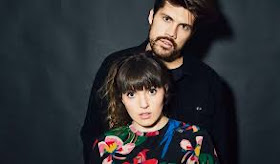 
'Our studio is on a busy main road, on the corner of two bus routes. henever we’d start recording, another bus would go by. We couldn’t do vocals before 10pm... But some buses do sneak in. The album opens with a bus, an ode to the fact that the entire album was compromised by London transport. There’s also a police siren from New York, where we had the same problem with traffic. We could have made our lives easier by going to a studio with soundproofing, but that isn’t us. Our lives are in these songs and it didn’t feel fair to leave the night buses out'


Josephine has also discussed how the song High on Humans on Ultralife was written on the way back home from Brockley Station after an encounter on the tube home from Heathrow with a guy :'covered in blood [with] no teeth, looking sorry for himself.  I tentatively went up to him and his girlfriend and said, 'I just wanted to let you know you'll be fine', Go to the dentist tomorrow, don't panic, you'll be great'. And he was like, 'Oh, thank you so much!'.


'And then this guy opposite us piped up, 'I broke my nose, too!'. And suddenly this whole little carriage was talking about their injuries, which was remarkable.  When I got off the Tube, I was so excited. Chatting to strangers gives you such a buzz because there's that element of fear before you talk to someone. So I walked from Brockley station back to my house, singing into my phone. And I've got this really funny voice note, which is like, 'I'm getting high on humans!' (Josepine had herself smashed teeth and broken her nose in an accident a couple of years ago).